Art Exhibition at The Qube, Oswestry 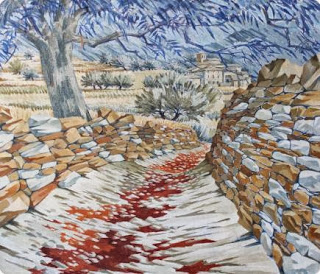 The next exhibition at the Qube Gallery Oswestry, opening on October 19th, features the paintings and drawings of Mildred Elsi Eldridge who painted much of her work, during the 1940 and 50s, whilst teaching in Oswestry and at Moreton Hall. A star pupil at the Royal College of Art, whose work was admired by Sir Stanley Spencer, she successfully exhibited her one-woman show at London’s Beaux Arts Gallery in 1937.  However, she then gave up the London art scene and opted instead for the beautiful countryside of the local borderlands.

Whilst lodging in Chirk she met, and later married, R S Thomas a young curate who was to become the foremost Welsh poet of the 20th Century.  Elsi was a prolific artist reputedly producing, at one time, a painting every fourteen days many of which she gave away or sold to support the family finances.  “There must paintings in and around the Oswestry area, work she gave to friends and acquaintances” said Laurel Roberts CO of Qube “we should love to hear from anyone who owns a painting by Elsi.”

Elsi illustrated and wrote children’s books and illustrated the dust cover of R S Thomas’s volume of poems ‘Stones from the Field’ in 1947. Her work draws strong inspiration from wild life and she developed a passion for natural history illustration producing copious numbers of drawings of birds, animals, butterflies and moths some of which were published by Medici cards. Possibly her greatest achievement was the huge mural commissioned for the Orthopaedic Hospital at Gobowen, “The Dance of Life” which is now permanently installed at Glyndwr University with the support of Arts Council Wales.

After her marriage, Elsi’s reputation as an artist was overshadowed by the critical acclaim awarded to the poetry of R S Thomas her husband. “We hope this exhibition will demonstrate to local people what a considerable talent Elsi was in her own right” said Trudi Graham arts adviser to Qube, “ she was a major female artist of the 20th Century and there must be many people in the locality who remember her.” This Qube Gallery exhibition is one of a number which are featuring, during 2013, the work of under-recognised female artists. The exhibition will feature Helen Williams-Ellis’s engaging film ‘Who Was Mrs R S Thomas’.

The exhibition runs for a month, anyone wanting further information or who wish to talk about Elsi, should call Qube on 01691 656882 email info@qube-oca.org.uk or pop in.